Why the Military Base at Henoko, Okinawa is Bad For Everyone

1. Necessity – The base is considered strategically unnecessary by many, including members of the U.S. government and military, since the marines would not be used in the event of a conflict in Asia.
2. Cost – The base is running billions of dollars over budget.
3. Environmental Destruction – The location of the base would destroy a coral reef filled with hundreds of rare and endangered species, including the Okinawa dugong. It is the second-most biodiverse reef in the world, only behind the Great Barrier Reef.
4. Water Poisoning – Studies have shown dangerously high levels of toxic chemicals (PFOS / PFAS) have been detected in the water near U.S. military bases in Okinawa, as well as elsewhere around the world. This has led to a rise in a number of serious health problems including thyroid disease and risks to pregnant women.
5. Feasibility – The base is considered to be unfeasible from an engineering stand point due to the poor soil conditions at the construction site, as well as due to the location occurring directly over a major earthquake fault.
6. Safety – Due to the engineering concerns of the location, the base would needlessly endanger the lives of U.S. soldiers.
7. Human Rights Violations – The indigenous Okinawan people are strongly opposed to the base, and have peacefully and democratically expressed their opposition. To ignore this is to send the message that peace and democracy do not work.
8. Diplomacy – If the U.S. wants to maintain amicable relations with Okinawa, it needs to work with Okinawans and protect their well-being.
9. Peace and Prosperity in the Asia-Pacific – The base would unnecessarily heighten tensions with both China and North Korea, harming peace and trade talks with both.
10. Economy – Military bases are a heavy burden on Okinawa’s economy. The military contributes just around 5% to Okinawa’s economy, while taking up over 15% of Okinawa’s land, including around 30% of its arable lands.
11. Tourism – The extremely scenic and biodiverse coral reef at Henoko is a good location for eco-tourism. Destroying the reef would remove this eco-friendly tourism opportunity.

The Peace For Okinawa Coalition has made a formal request to Congresswoman Tulsi Gabbard (D – Hawaii) to take measures to cease the construction of the military base at Henoko, Okinawa.

Gabbard is a member of the House Armed Services Committee and the Readiness subcommittee. She is currently running for President and has been outspoken against regime change and unnecessary wars.

The formal request, made on June 4, comes after months of dialogue between the Peace For Okinawa Coalition and dozens of members of Congress, as well as members of the United Nations and numerous non-governmental organizations.

“This provides Congresswoman Gabbard the opportunity to backup her claims of pursuing peace, diplomacy, environmental protection, cutting unnecessary government spending, looking out for the best interests of troops, and protecting the rights of indigenous peoples,” said Robert Kajiwara, president of the Peace For Okinawa Coalition.

Kajiwara’s petition to stop the base at Henoko has over 211,000 signatures on it, including from celebrities such as Dr. Brian May of the rock band Queen. The U.S. and Japan governments are nevertheless pushing ahead with the construction.

The base at Henoko has long been derided for a number of reasons, including lack of necessity, high costs, structural infeasibility, environmental degradation, danger to U.S. troops, and human rights violations. The indigenous Okinawan people are strongly opposed to the base. In the U.S., opposition to the base has come from both democrats and republicans. The late Senator John McCain referred to it as unnecessary, unworkable, and unaffordable.

“If Congresswoman Gabbard sponsors this bill, it will likely garner her the support of hundreds of thousands of our followers, as well as followers in the many other non-profit organizations that we collaborate with,” said Kajiwara. “Likewise, if she refuses, it will likely garner criticism and even attacks from many who are counting on her to pursue peace, the environment, and indigenous rights.”

“There are scant references in American media related to the consequences of the United States, through a succession of administrations (Obama and Trump), support for Japan’s Prime Minister Shinzo Abe’s desire to “reinterpret” Article 9 (against the will of the people) of the Japanese Constitution, which had previously served to deter Japan from engaging in offensive military preparedness and engagement. The undue burdened placed on the Okinawan people, who are unnecessarily placed in harms way, is just one result among many, of this nefarious collaboration.”

Due to the fact that you are on the Readiness sub-committee of the House Armed Forces Committee, the Peace For Okinawa Coalition requests that you sponsor a bill to stop the construction of the military base at Henoko, Okinawa. We believe that you are the best person to sponsor this bill due to your outspokenness against regime change and unnecessary wars, as well as due to your ability to work on bipartisan issues such as this.

The military base at Henoko is strategically unnecessary since the marines would not be used in the event of a conflict in Asia. This base is catastrophically damaging to the environment, a drain on taxpayer dollars, further exacerbates hostilities with China and North Korea, and most importantly, against the will of the indigenous Okinawan people.

The issues surrounding the Henoko military base are increasing anti-U.S. sentiment in Okinawa, and may very well result in Okinawans demanding a complete removal of U.S. military forces if nothing is done to protect the well-being of the Okinawan people.

Our petition to stop the base has over 211,000 signatures from people who are angry that the U.S. government has so far ignored our calls to stop the construction. The longer the construction continues, the more damage will be done to Okinawa’s environment, as well as to U.S.-Okinawa relations.

The Peace For Okinawa Coalition has received widespread media coverage both nationally and internationally, and if you sponsor a bill to stop the construction of the Henoko military base, it would draw a lot of positive publicity for your presidential campaign, especially since it would back up your claims to pursue peace and diplomacy, cut wasteful government spending, protect the environment, and protect the rights of indigenous peoples. This would ensure most of our 211,000+ signees will support your campaign, and will likely inspire many other peace organizations to do the same, many of whom we are working with.

The base at Henoko would be dangerous for U.S. soldiers due to its poor soil conditions, as well as to its location directly over a major earthquake fault. Supporting this bill to stop the base would also demonstrate your sincerity in looking out for the best interests of the U.S. troops.

We hope you will take this seriously. Please let us know if you have any questions. We look forward to working with you.

Special Advisor on the Rights of Men, Women, and Children

New York Area Liaison / Survivor of the Battle of Okinawa 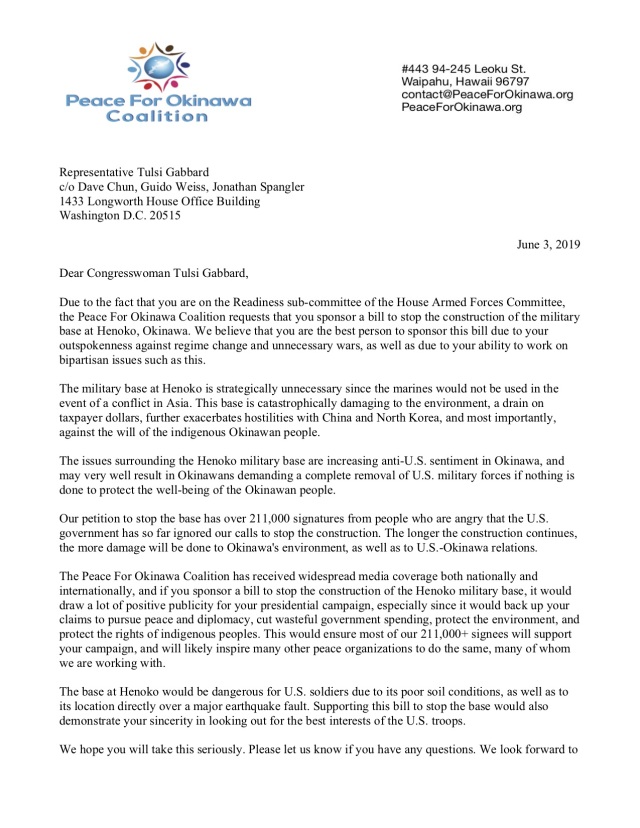 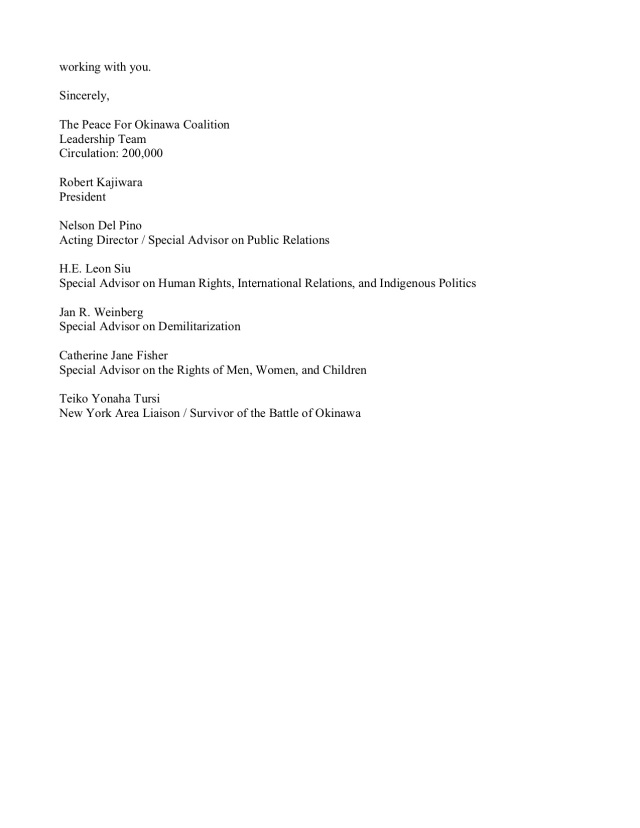 I am writing to inform you that on June 4, 2019 I received a response via email from the United Nations Human Rights Council regarding the White House petition to save Henoko, Okinawa. I had originally submitted the petition, along with an official complaint to the Council, first on February 13, 2019 via post mail and then on February 16 via email.

I am pleased that the United Nations Human Rights Council appears to be taking the matter seriously. My advisor in the United Nations has informed me that the Council does not respond to all of the complaints it receives, so a response is a very positive sign, and that they are asking for more specifics so that they can conduct a credible investigation into the matter.

The response from the Human Rights Council asks for more information regarding the domestic attempts to solve the issue (i.e., attempts by activists, attempts by the Okinawa Prefecture Government, etc). The UN has requested this information be sent as soon as possible. Therefore, anyone who has anything they would like included, please send it to me immediately for review.

Please note that my complaint was not only about Henoko, but also about the bigger issue of the Government of Japan’s prejudice against Ryukyu / Okinawans.

I look forward to the UN investigating the ongoing human rights violations and genocide occurring against Okinawans.

We acknowledge receipt of your complaint submitted to the Complaint Procedure of the Human rights Council. After a careful review of the content of your communication, we kindly request you to provide the following information as soon as possible, which you can send by e-mail or registry mail.

Please note that it is for the author of a complaint to substantiate his /her allegation and to provide the necessary information and documentation in support of his/her claims. In this regard, your complaint should be more precise in the exhaustion of domestic remedies. This information as presented is not sufficiently clear in order to enable us to process your complaint.

Therefore, you are kindly requested to provide a clear picture of the steps taken by or on behalf of the alleged victims to exhaust domestic remedies. Please provide details on the procedures which have been pursued, including recourse to the courts and other public authorities as well as human rights institutions, the claims made, at which time, and what the outcome was.

If the domestic remedies have not been exhausted on grounds that their application would be ineffective or unreasonably prolonged, please explain the reasons in detail.

Please note that without this documentation, the Chairperson of the Working Group on Communications of the Human Rights Council‘s Complaint Procedure will be unable to consider your complaint.

The Secretariat of the Human Rights Council’s complaint procedure.

The Peace For Okinawa Coalition has formally condemned the controversial construction of the Thirty Meter Telescope on Mauna Kea, Hawaii’s tallest and most sacred mountain.

In an email to University of Hawaii President David Lassner and the Board of Regents, the Peace For Okinawa Coalition criticized the project for violations against Native Hawaiians, environmental destruction, and for failing to benefit the local people of Hawaii.

“Okinawans, as well as Okinawa supporters, stand with our indigenous cousins in protecting our rights, our culture, our ancestors, and our environment,” wrote the Coalition.

ROBERT KAJIWARA, President of the Peace For Okinawa Coalition and University of Hawaii alumnus, has pledged not to give any alumni donations to the university until all plans for construction on Mauna Kea are scrapped and President Lassner is removed from office.

“It’s crucial for Okinawans and Hawaiians to work together towards our shared endeavors,” said Kajiwara. “Native Hawaiians have very strongly supported Okinawan issues. It’s time for Okinawans to return the favor.”

The University of Hawaii Board of Regents has acknowledged receipt of the message.

The Peace For Okinawa Coalition is writing to inform you that we strongly condemn the University of Hawaii’s construction of the Thirty Meter Telescope (TMT) on Mauna Kea.

Mauna Kea is a sacred mountain to Hawaiians, and is also a rare and fragile ecosystem. Your decision to violate the rights of Hawaiians shows a blatant disrespect and lack of understanding of Hawaiian values. Okinawans, as well as Okinawa supporters, stand with our indigenous cousins in protecting our rights, our culture, our ancestors, and our environment.

Thank you for your time.